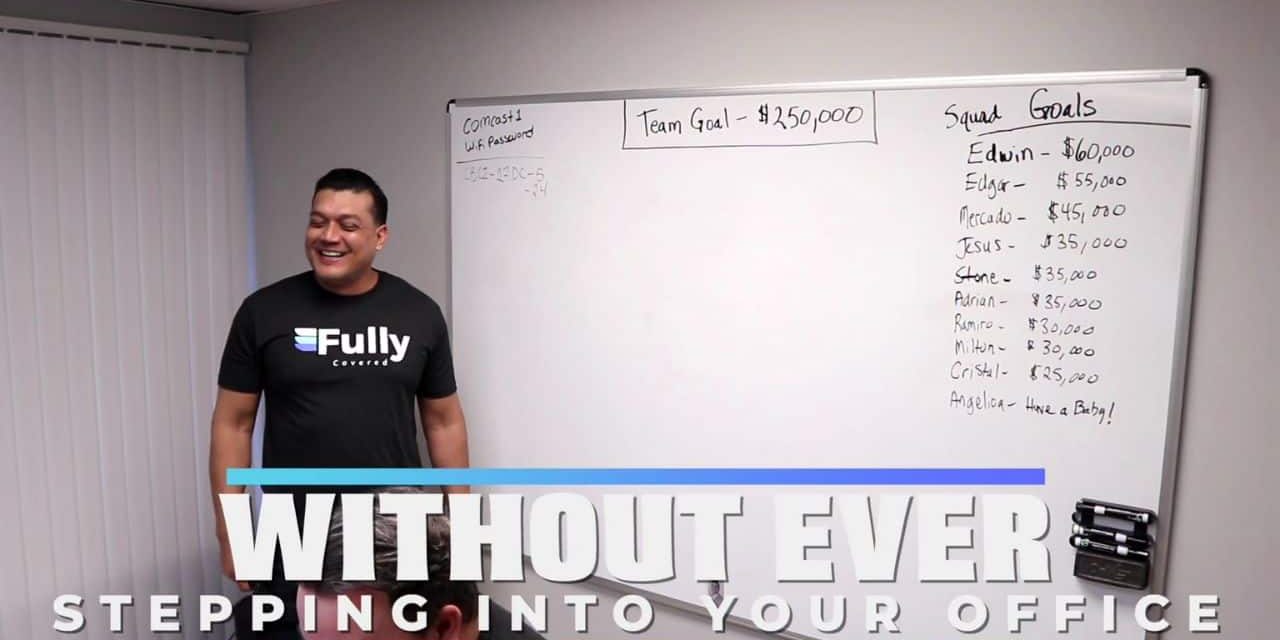 If you sell P&C insurance and you work more than 5 hours a day..

Then I hate to break it to you but the way you’re running your agency is completely BACKWARDS.

WITHOUT sacrificing how much you take home in commissions.

And before you ask, this isn’t about generating thousands of low-quality, garbage leads online.

In fact.. the system I want to share with you over the next few minutes will actually have you getting pre-qualified, inbound leads that close at 50-60% at an absolute MINIMUM, if you’re captive.

And up to as high as 90% of you’re independent.

If that sounds like the kind of growth you want for your insurance agency, stick around and find out more. 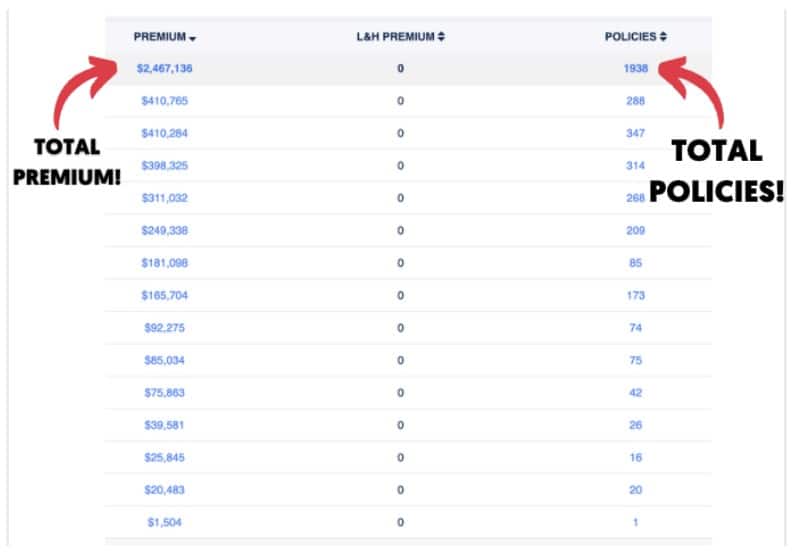 For a grand total of $2.46 MILLION worth in new business premium.

Plus to date I’ve helped hundreds of insurance agents from all over the country 2-3X their production, become one of the top agencies in their area..

…and most importantly break them FREE from the typical 6 day a week insurance agent grind.

To the point where many of them are now only working 2 or 3 days a week.

If I’m being honest.. my agency didn’t always look like this.

But the problem was that I was working 10 hours a day, 6 days a week just to keep that level of new business coming in.

And this is actually one of the BIGGEST mistakes insurance agents all over the country are making.

But the truth is none of these outdated tactics were designed for what the modern-day insurance agent needs to scale their business.

So what worked GREAT 20, 30 years ago has not only become ineffective…

It’s likely even holding you BACK from getting the kind of growth you want to see inside your agency.

And again, this is exactly what I lived through myself.

I spent years pounding the pavement, working 60 plus hours a week just to get by.

making cold calls and getting hung up on…

Hitting up BNI and Chamber of Commerce events…

Schmoozing up to the local mortgage pros with donuts, coffee, and $50 amazon gift cards…

Running giveaways that, for the most part just get you loads of tire-kickers…

Which wasn’t at all what I envisioned when I first got started selling insurance in the first place, you know?

I wanted to live like a business owner, and have the freedom to work on my OWN schedule.

While these tactics worked GREAT 20, 30 years ago, and were worth the time back then…

They weren’t designed for the modern-day insurance agent.

Which I’d say is anyone looking to scale an insurance agency from 2010 onwards.

But look – there IS hope.. and by using this new system, you can generally expect to double… potentially even TRIPLE your production in just 90 days from now…

Without making a single cold call, running a single giveaway, or trying to bribe any referral partners with a $50 Amazon gift card.

And I’m not just making those numbers up either.

Ever since I started using this insurance lead management system myself, inside my agency…

And I’m also on track to repeat those numbers this year, having sold $882 THOUSAND in premium as of the end of April.

All while working just ONE day a week.

Making it easy to keep a flow of 50 to 60 pre-qualified, exclusive leads coming INTO your agency.

Rather than you always having to go out and chase ‘em.

Which also means, not only can you hit record months inside your agency using this insurance lead management system… but it’ll also help you get your life back.

To where instead of being out at networking events until 8 or 9pm, now you can kick back at home and spend time with your family.

Now you can spend just ONE to TWO hours closing the inbound leads that come to you on their own – then spend the rest of your day doing whatever it is YOU want to do.

The point is, this isn’t just about making more money. It’s about helping you go from working IN your business… to working ON it.

See what I mean?

Now I’m going to share how this all works in just a second.. but first I want to be clear:

Nothing that I’m going to show you has anything do with generating a million low-quality, tire kicker leads on social media.

And there’s a reason why there’s like a revolving door of them. That kinda junk just doesn’t work in the LONG term.

At the same time though…

This doesn’t require you to become some sort of expert, online marketing guru either.

I mean at the end of the day, we have agencies to run!

…Which also means this isn’t gonna suck up hours of your time that you probably don’t have anyway.

Including both indys and captives from over 45 different states.

The Surprisingly Simple Way To Generate Quality Insurance Leads Than You Can Handle, Automate Your Day-To-Day Business, All While Keeping A Lean, Low-Cost Team To Manage Everything

1 – Smart Form/AI Technology to start generating your OWN high quality leads. It’s automatically filtering out bad leads and only focusing on bringing in high quality prospects.

So you never waste your money on attracting the tire kickers. We do this by giving Facebook exactly what it wants.

This is a blend of the right data, and the right website structure that actually makes your users happily engage with your ads which is what Facebook wants.

In return, they reward you with extremely low ad cost because Facebook wants you to keep spending money in the long-term.

When you walk in the door with hot, exclusive leads, you automatically become their referral partner that everyone wants to work with.

To the point that they’re actually begging to work with you.

Myself and my students have our referral partners covering all of our lead cost, thanks to the system we developed.

It’s all about running your insurance agency without you so you can do other things that make you more money and spend more time doing things that you enjoy.

This also automates 99% of your lead generation and finding referral partners so you can focus on closing deals.

This insurance lead management system makes the follow up 99% hands-free, allowing you to live a real life that most insurance agents only dream about.

…all while cutting DOWN the hours I work by over 90%.

Plus to date I’ve given this system to well over 1,000 P&C Agents and counting – including both indys and captives from over 45 different states.

Many of them have gone on to see similar results.

The point is, this isn’t some hocus pocus system that gets you a thousand leads of questionable quality once – maybe twice.

This is a full-fledged, long-term agency scaling system that, once plugged into your business…

Could likely even 2-3X your production inside the next 90 days.

But then, most importantly…

It’ll also allow you to maintain that level of growth for the next 5-10 YEARS.

Or however long it is you want to run your agency before selling it and moving on to whatever’s next in life.

Now, if you’d like to see the entire insurance lead management system up close – including how it works, WHY it works, and how to get started using this yourself…

I just posted a breakdown video that you can watch by clicking the button you see below.

It’s completely free, there’s no tricks.. I’m not gonna ask you to sign up for anything and I don’t want your credit card number either…

I’m doing this simply because, after personally living through the 6 day a week grind for YEARS…

I genuinely enjoy sharing what I’ve discovered with other agents – to help them completely transform their agencies too.

If that’s a problem for you, you don’t have to watch…

However if you are interested in a better, more effective way to generate quality insurance leads to scale your insurance agency…

Then click the button below to see the full breakdown of how this system works, and how you can use it to add an extra 30 to 40 monthly P&C deals to your bottom line.

I look forward to seeing you over there.

Nato owns Guajardo Insurance Agency. He learned the lessons he needed to learn so that his agency avoided the traditional ups and downs of lead flow and sales. He created Fully Covered to do just that. A methodology and system that provides predictable and automated online leads to insurance agents that have a passion for helping people.

Today, Nato runs his business together with his wife, Angelica, without the stress of finding the next client or worrying about if there is enough money in the bank. Plus, he gets to protect clients with our Agency and protect his peers through education and systems that took years to figure out on his own.

How To Grow Your Insurance Business With The Fully Covered Program
May 19, 2022

4 Must-Read Books for Insurance Agents And The Truth Behind My Success
March 4, 2022

Top 5 Insurance Marketing System Benefits for You and Your Business
January 31, 2022

Insurance Marketing to Millennials: How To Reach and Sell to Generation Y
January 20, 2022